After I had Harper I was talking on the phone with my sister and she asked me if I had started losing my hair yet. I told her no and asked her what she was talking about. She told me that once Harper turned 3 months that I would start losing my hair. It is a normal occurrence in postpartum women. I had also been to visit my cousins close to the time I talked to my sister and both of them told me it happened with them as well. Sure enough, as soon as Harper was 3 months I felt like I had turned into a cancer patient. It was crazy! While women are pregnant they don't lose their hair. Maybe a little, but definitely not as much as normal. You all know what I'm talking about. You're in the shower and you pull out a few strands here and there. Well, that doesn't happen when you're pregnant. Once you've had the baby and your body is getting back to normal, it gets rid of all that hair that you would have lost during those 9 months had you not been pregnant. Making up for lost time, I guess. 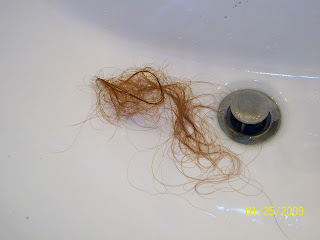 This is what is coming out of my head now. When it all started it was about three times this amount. No exaggeration.
*This doesn't happen to all women. I know there are a couple of you who read this who are pregnant for the first time. Don't worry. I do know of some girls that this didn't happen to. Just check with the other girls in your family and go off of that.
Posted by abbyB at 11:22 AM