Our daughter, the boy

I feel like I complain about Rexburg a lot. And I know that I really need to be better about that and just have a better attitude about this place. I'll work on it.

I truly feel that is complaint is warranted though.

In Rexburg, there is a Wal-Mart, an Albertsons, a Kmart, and a Broulims (local grocery store). There are obviously other stores but those are the four largest ones and they tend to be the go-to stores for the majority of the population in Rexburg. Ryan and I favor Wal-Mart and Broulims. They are the most affordable. The Wal-Mart is a decent store (not a Super Wal-Mart) and has been pretty reliable for us in the past. Then Harper came along.....

We were very blessed during our pregnancy with Harper. I had two showers thrown for me when I was pregnant and one after she was born. So we were pretty set with wardrobe for her for the first couple of months. As many of you know, babies grow quite fast and new clothes are required quite frequently. Also, diapers are blown out of often and outfits need to be changed multiple times a day. Well, one day I went to Wal-Mart to get some back up onesies. I wanted to get the long-sleeved, white ones since we live in the frozen tundra. One would think that Wal-Mart carried them. No. None. Not in any size did they have long-sleeved, white onesies. I settled for the short-sleeved ones and figured we could do layers. The only long-sleeved ones they had were colored and had silly sayings on them. I did get those as well.

Harper is a long baby, so in order for her to comfortably fit into the footie pajamas, I usually have to get the size bigger than her age. She is in the 6-9 month ones now. I went to Wal-Mart to get some in that size for her and they didn't have any in the girl colors or the neutral colors. So I settled for the boy ones with all of the baseballs, footballs and basketballs. 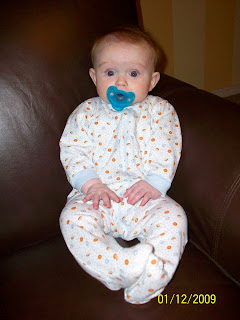 Oh my gosh Abby!!! I have the exact same problem. How about a Carters here?! You know it would do so great. I constantly am telling my mom to send us things... long sleeve onesies being one of them. I HATE IT! I love that picture of Harper though... She looks a little shocked in the pic too, its priceless. Oh and as far as the pajamas go, Beckett is in mostly 6-9 months, but something he has to move up to the 9-12 month. How do they grow so fast???

Awww!! Abby! Harper's in boy clothes! So funny! I'd be complaining too!!

That is CRAZY! Because I have never been able to find boy stuff, I feel like Walmart only has girls stuff!

Abby I found long sleeve white Gerber onies on Walmart's website. I am ordering them. You can just to site-to-store. It's a pack of 4 for like $12. I was so excited when I found them. One thing I have learned from living in Rexburg is the importance of online shopping for Lexi.

Devo has the same jammies...that is funny! Harper looks a lot better in "boy" clothes than Devo would in pink and bows. Am I right? Plus, his daddy WOULD mind :)