Last Saturday our ward had an opening social bowling activity. One of the good things about being in a college ward is that there is so much turnover that we get to have opening socials every semester. I love ward activities! We had a good time bowling on the same lane with the other counselor in the bishopric and his wife. We played a couple of regular games and then the last game we played was a "goofy" game. We did things like bowl between the legs, left handed, behind the back, sitting down, etc. We did a different trick each frame. I highly recommend that. It is a lot of fun. On the 'behind the back' frame, Ryan got a little over-zealous and pitched his ball a little too hard. It ended up bouncing into the lane next to us. Oops. Below are a few pictures from the day. 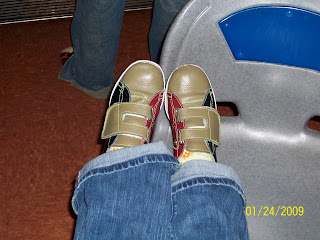 Yes, those are velcro shoes. Yes, those are my feet. The only other person wearing shoes like that was a guy in the ward named Ryder. Oh, by the way he's three. This is Harper and her pal Ryan. Ryan's almost one. 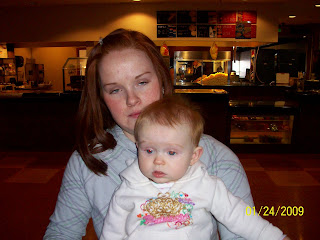 Ryan took this picture and said that Harper and I both looked high.
Posted by abbyB at 1:48 PM

Thanks for the birthday message! And the best birthday present...MORE updates?! Holy cow, you are on a role and I love reading all of them!!!!!