Out of my league 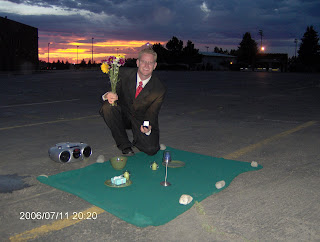 My sister in law, Ginet, just posted about things that she is grateful for and she inspired me to post about something that's been on my mind lately: my husband.

When I turned sixteen, the phone wasn't exactly ringing off the hook with guys lining up to ask me out. I was a late bloomer and I unfortunately had braces up until my second semester of college. I didn't really date that much at all. I had one guy friend that some may have considered a boyfriend, but that was it. I think I was that girl that guys always considered really good friend material, nothing more. Once I graduated high school and came out to college I made tons of friends and I always had gorgeous roommates. They would always get asked out and I always felt sorry for myself. Of course I had crushes and guys that I was interested in, but whenever I expressed my interest it was always unrequited. I realized that maybe I was letting myself like guys that were out of my league. After I realized that, I just cooled off and stopped looking around and trying to meet guys. That lasted for about a year (it felt longer!). I came back out to school for my second year and I told myself that I wasn't going to try to meet guys and worry about dating. I was going to just have fun with whatever friends I made. Well, about a third into the semester, a guy in one of my classes asked me out on a date. His name was Paul. We doubled with my roommate and his roommate. The date went really well, or so I thought. Paul was engaged (to someone else obviously) about six days after our date. A couple of weeks later, I was asked out by an ice skating rink attendant who noticed me when I went ice skating with my roomies. At the end of our date, he gave me a high-five....we didn't go out again. A couple more weeks later I went to a basketball game with my roommates. One of my roommates' boyfriend was playing, so we went to watch. I noticed player #1 during the game and I pointed him out to my friend, Katie. I told her that I thought he was really cute. I really wanted to meet him, but I was afraid that it was going to be a rerun of my experiences the year before. Well, I finally asked my roommate's boyfriend to introduce me to him and he arranged a meeting for us at a country dancing activity on campus, his name was Ryan. We met and got along really well. You obviously know the end of this story.

I am so glad that I had the guts to do something about meeting Ryan. He was the third date that I ever went on in my life. He is only the second boy I have ever kissed in my life. He is so out of my league, but I'm sure glad he picked me.

The picture is of Ryan right before he proposed to me.
Posted by abbyB at 6:23 PM

Your definitely an english major, I had to pull out my trusty American Heritage dictionary for "unrequited." Maybe I just have a low vocab.

I mean't to say You're

That is so sweet Abby. But to be honest with you, I am sure Ryan feels that you were way out of HIS league. You two are so cute!

You are too funny- If you ask me- Ryan for sure married way up.

Love it! Keep up the good blogging:)